The “New” Genre of Romantic Horror 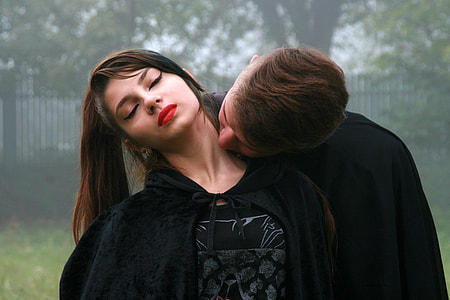 Jumping into the world of romance books is like jumping into a rabbit hole with both feet in.  Romance, on its own, has subgenres in almost every other genre of literature.  Not only can it be historical, contemporary, or futuristic, it can also be sci-fi, fantasy, paranormal, and even dark.  To this long and ever-growing list, a new subgenre has been introduced and those that like it like it a lot.  This new genre is called romantic horror, although it is oftentimes placed in the ‘dark’ category.  Unfortunately, the ‘dark’ genre is a very broad category in itself and only scratches the surface of romantic horror.

In the broadest sense, romantic horror is just that, a horror book that focuses on romance more than the horror aspect, but is still immersed in horror.  For example, the female main character might be plotting revenge against someone or have an obsession with serial killers. They could also have been kidnapped as a child and developed Stockholm syndrome as a result. There will be lots of blood, guts and gore, a heavy dosage of sex, and a romantic plot that will make the readers wonder where they can find a guy like that in the end. There are also triggers in these books that a ‘dark’ book might not have, including, but not limited to: rape, PTSD, dub-con, gore, and more. The author will always state trigger warnings in the introduction. The reader must be aware of any triggers that they might have and make their own decision whether to pick up the book or not.

If a reader is just testing the waters of romantic horrors and is not too sure where to start, one of the best series in the genre is the Mindfu*k  series by S. T Abby.  S.T Abby is one of many names that author C.M Owens writes under and one can’t go wrong with any of her books.  In the first book of this series, The Risk, the reader is introduced to Lana, a serial killer out for revenge and one that has a very particular list of who she will hunt and kill.  She meets Logan, the FBI agent that is in charge of a team that is hunting down serial killers, and she just happens to be on his list to catch. Each character takes on a life of their own and the reader will not be able to stop themselves from cheering Lana on, wondering how she will get the next guy and what Logan will do when he finds out that she is the one that he is after.  The story expands from there and at the end, four books later, the reader is left with a book hangover to end all book hangovers and a determination to find other similar books.  Not to worry, the romantic horror community has you covered.

If Mindfu*k has started you into the new genre, then the next author to turn to is K.A Knight and Her Monsters series.  Although only two books have been published to date, the first one is everything you expect in the romantic horror category.  In Rage, Dawn is brutally killed by her husband and is tossed into a shallow grave in the middle of the woods.  Unknown to Dawn and her ex-husband, Dawn is not exactly human and a little death is not going to stop her from having her revenge. During her quest to destroy her ex, Dawn meets the loves of her afterlife, including an old god, a half angel, a dragon, and a minotaur. All of which are more than supportive of her body count.  In addition to romantic horror, this is also a reverse harem in which Dawn will end up with more than one partner, five by the end of book two with more that may or may not come.  Once again, trigger warnings do come with this series, but it is a great book about love after divorce and how great getting even can be.

As a reader, if the first two authors led you to having a new favourite genre, then the next author to check out is Candace Wondrak.  Out of these three authors, Ms. Wondrak writes a much darker world of romantic horror, although all of her characters live happily ever after at the end of her books.  The majority of her series follows different members of a family that has been born and bred to kill and have no problems hiding the dead bodies at the end of the day.  My personal favourite is Cruel Black Hearts, which is about a quiet journalist named Stella that has an obsession with serial killers.  All of her articles focus on them, either through her job or her personal blog, but with all that attention on serial killers, it is no wonder that a few serial killers have their eyes set on her.  Once again, this is a reverse harem in which Stella falls for not only two serial killers, but a third one as well. There is also a psychological aspect to the series as one of the main characters suffers from a mental disorder that is not discovered until later. Each character is written so in depth that as a reader, you can’t help but feel drawn into the world that she has created. If you don’t mind a bit of blood and dead bodies mixed in with the romance, Ms. Wondrak is definitely a go to author for romantic horror.

If a reader is not into a series, Candace Wondrak also has published a few standalone books in this genre, including Sins, a dark high school bully romance.  In this book, Celeste has managed to escape from the men that kidnapped her when she was a child, and she discovers that the outside world is a lot harsher than the one she experienced with her kidnappers. By the end of the story, you cannot help but cheer for Celeste and wonder how she will seek revenge.  Again, this is a reverse harem book where Celeste experiences Stockholm syndrome and tries to find the men who kidnapped her so she can go back to them.

There is a whole world to the romance genre just waiting for people to step in and explore. The ‘dark’ subgenre is expanding on an almost daily basis as authors introduce new works that seem to push the envelope when it comes to people’s expectations. Romantic horror is the perfect example of where ‘dark’ just doesn’t seem to cut it when it comes to blood, death, and a love to last for all time.  Although there are numerous authors that explore this new genre of romantic horror, S.T Abby, K.A Knight, and Candace Wondrak will help readers determine their level of tolerance for the genre and are a great place to start.